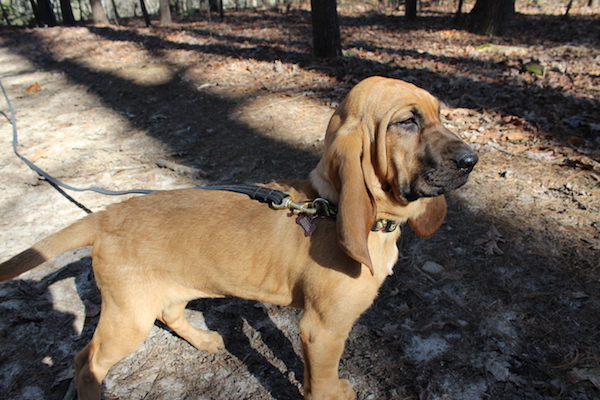 Dozens of names were suggested, and the winning names were kept a closely guarded secret until the first week of March.  Then sheriff’s department K9 handlers, Deputies Turpin and Hawkins will take the pups to the schools of those who suggested the winning names. There, the students and their classmates will have the opportunity to meet the dogs and their handlers, and learn for the first time that the dogs have been named Bailey and Echo.

As it happened, one name was suggested independently by three different 5th graders: Shelby Cantrell of Hillandale Elementary, and Eric Rasheed and Jacob Nance, classmates at Clear Creek Elementary all suggested “Bailey”.  The name “Echo” was suggested by Cameron Banks, who attends Etowah Elementary.

Bailey and Echo, about sixteen weeks old as of PetGazette press time, are busy learning how to locate missing persons and track suspects.  The dogs will get their tracking certifications around six months old and will try for their longer-distance trailing certification when they are a bit older. Bloodhounds are sometimes referred to as “a nose with a dog attached,” making it easy to see why judges generally accept bloodhound evidence as valid probable cause for the issuance of search warrants.

In addition to learning their tracking trade, Echo and Bailey are also busy growing rapidly. This can be seen by comparing the early photo of one of the pups on a patrol car’s hood with a late February photo of Echo. Adult female bloodhounds generally weigh about 80 pounds, but can get up to 100 pounds. Echo and Bailey seem to be targeting the larger number.

Deputy Turpin is the handler for K9 Bailey, and Deputy Hawkins is the handler for K9 Echo. The two new pups and their handlers train every day to get better at their jobs of tracking and trailing. Eventually, Echo and Bailey will replace the two current adult bloodhounds which are approaching K9 retirement age.

Caption: Echo or Bailey shortly after arrival in Hendersonville.