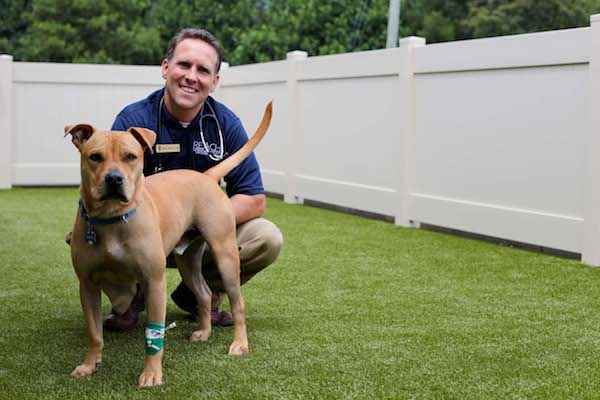 A useful therapeutic tool used to treat humans for over 20 years will soon be on-line at the REACH emergency and specialty animal hospital. The new veterinary hyperbaric chamber, slated to start helping patients in mid-October, is being installed as part of the addition to the REACH facility.

The new equipment is designed specifically for veterinary use for animals up to 180lbs. Like the chambers made for human use, it works by infusing medical grade oxygen into affected tissue at a much higher level than any familiar treatment. The result is that patients heal more quickly.

For example, according to REACH head Dr. Randy Wetzel, treatment in the veterinary hyperbaric chamber could promote healing even in infected wounds that wouldn’t respond to routine antibiotic treatment. He also mentioned “a partial list” of medical problems in smaller animals that could benefit from treatment in the hyperbaric chamber: smoke inhalation, snakebite, burns, abscesses, bites and slipped discs. He also said that hyperbaric treatment could sometimes even make surgery unnecessary.

The chamber being installed at REACH was developed and produced by Hyperbaric Veterinary Medicine, HVM. Their web site – hvmed.com – has more detailed explanations of hyperbaric treatment and case studies of pets treated for some common and serious injuries. The treatment is often referred to by its acronym, HBOT, for hyperbaric oxygen therapy, and is recognized by Medicare for its effectiveness. According to the HVM site, over 1000 human hospitals treat patients with HBOT.

Dr. Wetzel said that he and some of the others on the REACH staff are currently being trained in HBOT. Staff veterinarian Dr. Paula Levine is already familiar with HBOT, having used it previously in her Florida practice.

Pet patients getting HBOT are sedated on a case by case basis, but Wetzel estimated that the majority would not need it. The chamber’s windows make it possible for the pet’s owner to be visible to the pet being treated, which reduces its stress and anxiety levels. In any case there is always a staff member viewing the procedure.

The HVM machine being installed at the REACH facility on Brevard Road in Asheville will become only the third presently in the Carolinas. One of the existing two is in Matthews, NC, 142 miles away. The other is in Mt. Pleasant, SC, 269 miles away.

Dr. Wetzel expects that he will be getting many referrals from other veterinarians once the new veterinary hyperbaric chamber system is operative at REACH. That expectation is based on the combination of the effectiveness of HBOT and the new accessibility to it that his practice is bringing to Western North Carolina.