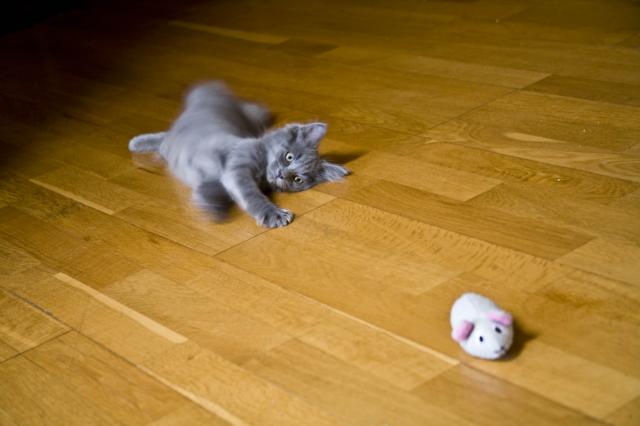 Behavioral problems are a leading cause of pets being surrendered or euthanized. In particular, inappropriate urination in cats is one of the most frustrating problems facing cat owners. As a vet, I think half of my clowder of fine felines came to me from owners who wanted to euthanize because of this bad behavior. In addition, a large number of cats who come into my practice have medical conditions caused by stress. Blocked cats, cats with bladder infections, diarrhea, cats who lick themselves incessantly, acute liver disease and even diabetes are all conditions that are often caused by stress. You can avoid bad behavior and costly medical bills by reducing stress in cats with natural enrichments to their environments.

Bored kitties are not happy kitties. Provide opportunities for cats to fulfill their natural need to hunt, play and climb. Use interactive toys that mimic prey, such as a toy mouse that is pulled across a floor, laser pointers, feathers, balls and other toys (Don’t use hands or feet so your cat does not develop the bad habit of biting you). Food puzzles and food balls can mimic the action of hunting for prey. Scratching posts and climbing towers are important for healthy cat play. Check the local pet stores and online. There are great new interactive toys available now that can help enrich your kitty’s day at home.

Cats are territorial animals and feel threatened when their territory is disturbed. Every cat needs a safe and secure place to retreat to so it feels protected. The cat should have the ability to exit and enter the space from at least two sides so it doesn’t feel trapped. Good examples of safe places are a cardboard box, a cat carrier, and a raised cat perch. Cats use scent, posturing, and vocalizations to communicate their unhappiness if threatened. Urine marking is an example of this. If your cat can see or hear that stray cat in the yard, or smell him through an open window or on your shoes, he is threatened and stressed.

Strange smells or sounds, often undetectable or insignificant to us, can increase your cat’s stress levels. That loud houseguest with strange smells and unfamiliar habits is incredibly stressful for most cats. Cats mark their scent by rubbing their face and body on things to establish boundaries – you’ve seen that black gunk on the door jams. Don’t clean these markings off – they are your cat’s pheromones, which establish his safe space. This is especially important when a new cat is introduced into the home or there are other changes in the home. The use of synthetic pheromones, such as Feliway®, either as a spray or diffuser, can mimic a cat’s natural pheromones and calm a stressed cat.

A cat’s life is really quite simple; all she needs are food, water, litter boxes, scratching areas, play areas, and safe sleeping areas. In a multi-cat household, these resources should be duplicated and separated from each other so cats have free access without being challenged by other cats or anything else that frightens them. Cats feel threatened if another cat approaches when they are urinating or defecating. Multiple litter boxes placed in areas where your cat won’t be disturbed or trapped will help encourage regular use. Don’t put the litter box next to the noisy furnace. Try to find ways to reduce competition among your cats.

If your mild-mannered older kitty can’t get to the water bowl without being jumped on by the frisky new kitten, she may avoid it and not get enough water. She may also avoid the litter box for the same reason and hold her urine, raising the risk of a bad bout of cystitis (bladder infection).

Socializing your cats from an early age can help keep stress levels down. Each kitty has his own personality and this will determine how much he likes being handled. Remember to remind guests and all household members not to force interaction and instead let the cat initiate, choose, and control the type of human contact.

Here are some great websites that give you many resources to help enrich your kitty’s environment and keep the stress levels and the medical bills down:

Dr. Carnohan graduated from the Kansas State College of Veterinary Medicine and has owned the Cat Care Clinic of Asheville since 2013. This article first appeared in PetGazette in January, 2016.